The BoneJiggler modifier can be applied to bones to add motion effects to the mesh. The modifier offers two categories of motion effects: inertia and oscillation. The modifier effects never move the bone itself, they only influence the deformation of the mesh to which BonesPro is applied. Please note that BoneJiggler effects are only applied when the corresponding checkbox in the BonesPro main dialog is activated.

The inertia controls allow you to add motion delays for the mesh deformation to simulate effects like moving parts with higher mass or wobbly after effects when a bone motion comes to a sudden stop. The inertia effect depends on the bone’s motion speed.

Delay - This spinner specifies the delay with which the mesh should react to bone movements. This gives the impression of heavy, inert parts of the object. The delay is given in MAX time units and is animateable.

Skid - This spinner adds another dimension to the Delay parameter. When skid is greater than 0%, the skin is supposed to be even more inert, it can even move beyond the point where bones stopped, if the stop was sudden. When the Skid is active, the Delay parameter is used to estimate the speed of the bone. This parameter is animateable.

The oscillation controls are used to simulate rhythmical movements that are independent from the bone’s motion. This can for example be used to create effects like breathing characters. The settings can be configured independently for local X, Y and Z axis of the bone.

Amplitude - This spinner determines the magnitude of the oscillation effect and is set as a percentage of the bone’s length. This parameter is animateable

Period - This spinner sets the duration of one oscillation (back swing + fore swing). The period is given in Max time units and is animateable

Shift - This spinner determines the starting point during the oscillation period and can be set as a Value from 0 to 360. This parameter is animateable.

About - Provides general information about BonesPro. 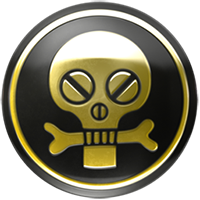